This is part 2 of a five-part series:

At Beezwax, devs might have three or four projects they’re actively working on in a given month. When stopping and starting lots of different Rails servers, sometimes I wind up with orphan Spring processes that might block starting the server or cause other problems (amusing: note in the change history for the linked github issue, the original title was “You’re breaking my laptop”). Or I might have a Rails server running on 3000 in another terminal that I forgot about.

So I made a script that quickly checks (and if desired cleans up) those processes before trying to start the Rails server.

This script is given in its entirety but broken up with my comments between sections.

This is straightforward — the script can be called with optional anonymous arguments for port and IP address with reasonable defaults.

Line 24 redirects lsof output for any process listening on the requested port to file descriptor 3 which is read by the while loop.

Why file descriptor 3, I couldn’t say, but there was probably a good reason when I wrote the script; maybe some interaction with the loop internally using 1 and 2?

Inside the loop, it awks out the pid, echos the entire lsof line, and asks me if I want to kill that.

awk is a programming language, but the only thing I know how to do with it is print individual columns from output. Many of these examples could be quite simpler if I were an awk guru, and I’m okay with that — I’ll do the best I can with the tools I have, and learn new features as I need them (or, more likely, when a friend or workmate points something out).

If I respond to the prompt with 'y' it kills the process.

This is a dev script, not a production distribution. I don’t need to test for ‘Y’ or ‘yes’ etc., ‘y’ is fine. There’s an example of more complete testing of input in Part 5.

On line 19, kill -9 is a little aggressive, but this is a dev environment; we can play fast and loose.

If I respond with a blank or enter anything other than 'y', I’m helpfully reminded that the port is in use and the script exits.

Next we do the same thing for anything that looks like a Spring process.

The grep -v is so grep doesn’t match itself, and the bit hacked out with sed is the line number added to ps output because my grep is aliased to grep -n:

You probably want to keep the grep -v grep but the substitution for the line numbers is likely just me.

TODO: refactor those loop bodies into a function (and maybe doing that would remove the need for the while loop to read on file descriptor 3?)

And finally, try to start the rails server. I like to save commands I’m going to run as a string and output the content of that string. It makes debugging easier.

basename and its friend dirname are super handy tools in your bash toolbox:

Line 2 gets the name of the project to use for the symlinks by getting basename of the current working directory:

Sometimes it’s helpful to get a visual representation of your data model, and the railroady gem can do that for you. It has dependencies on dot and neatographviz; both available on Homebrew and MacPorts.

Here’s some example output for a very small project: 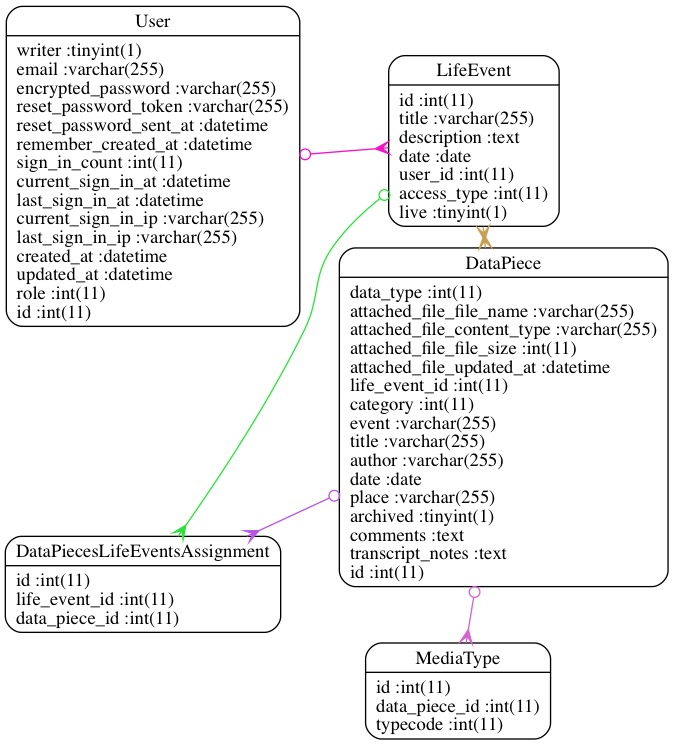 Obviously for larger projects, they’re much bigger and more complicated. If your project uses the PaperTrail gem on a lot of models, you’ll get a lovely flower shape with PaperTrail in the center and your models as oddly-sized petals.

On to Part 3: Other Examples