That old Bard, good Sir William, is nearing the end of his life. Having already provided well for his five children, he now seeks to divide his literary empire among his eleven grandchildren: 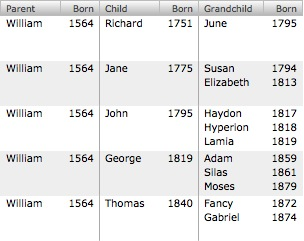 But Sir William is a mischevious fellow, and wants only to reward grandchildren who meet certain criteria:

How will he sort it out, and have some fun in the process? Luckily, Sir William has a copy of FileMaker Pro 11 Advanced on hand. But how should he go about it? Should he script it? No, he’s written enough scripts in his lifetime, and he’s grown weary of them. Should he construct a web of conditional relationships on the relationship graph? Also a tiresome prospect, as he’s woven together so many complex relationships in his time that it will take scholars centuries to unravel the mess.

Okay, then. How about a portal filter? Yes, a portal filter, that clever addition to FileMaker Pro 11 that moves all the idiosyncratic, one-off relationship logic up to the presentation layer. Within short order, Sir William has built a beautiful FileMaker layout to display which grandchildren shall be favored: 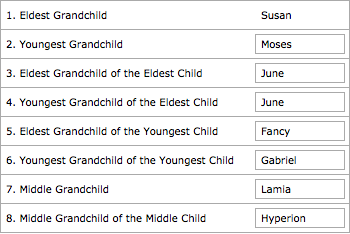 But how did he do it? First, he created a table structure to match his family tree:

Both the CHILD and GRANDCHILD tables are sorted ascending by birth year. That should take care of any issue with family being added to the database in an inconvenient order.

The primary problem to be overcome is that when traversing the relationship graph, FileMaker only respects the last sort order in its path. Thus when moving from PARENT directly to GRANDCHILD, FileMaker will respect the sort on GRANDCHILD, but ignore the sort on CHILD. So, it’s up to portal filters to identify the favored grandchild.

Finally Sir William settles on a custom function to help him massage the two lists of data (one of children, one of grandchildren). He’s disappointed that he couldn’t fit all the logic into the portal filter, but at least the solution exists solely in the calculation engine. First, his custom function: ParallelLists ( list1 ; list2 ; list1Value )

Then his portal filter calculation:

And with that, Sir William may rest easier, knowing that his FileMaker portal filters are ready to adapt to any changes in his family tree. May his grandchildren grow up to be as nefarious as he!

Here’s a quick summary of the techniques employed for each problem: 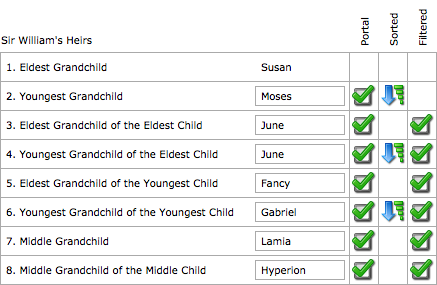