Out With the Old…

Anyone who has used FileMaker will be familiar with the powerful import abilities the platform has. Being able to quickly and easily ingest comma- or tab-delimited data and Excel files makes merging multiple data sources into a single cohesive application pretty convenient. However, the import UI that has existed for the platform over the last decade (maybe longer) is cumbersome and often downright frustrating. This is especially the case when trying to import many columns and match them to fields with different names than the source. 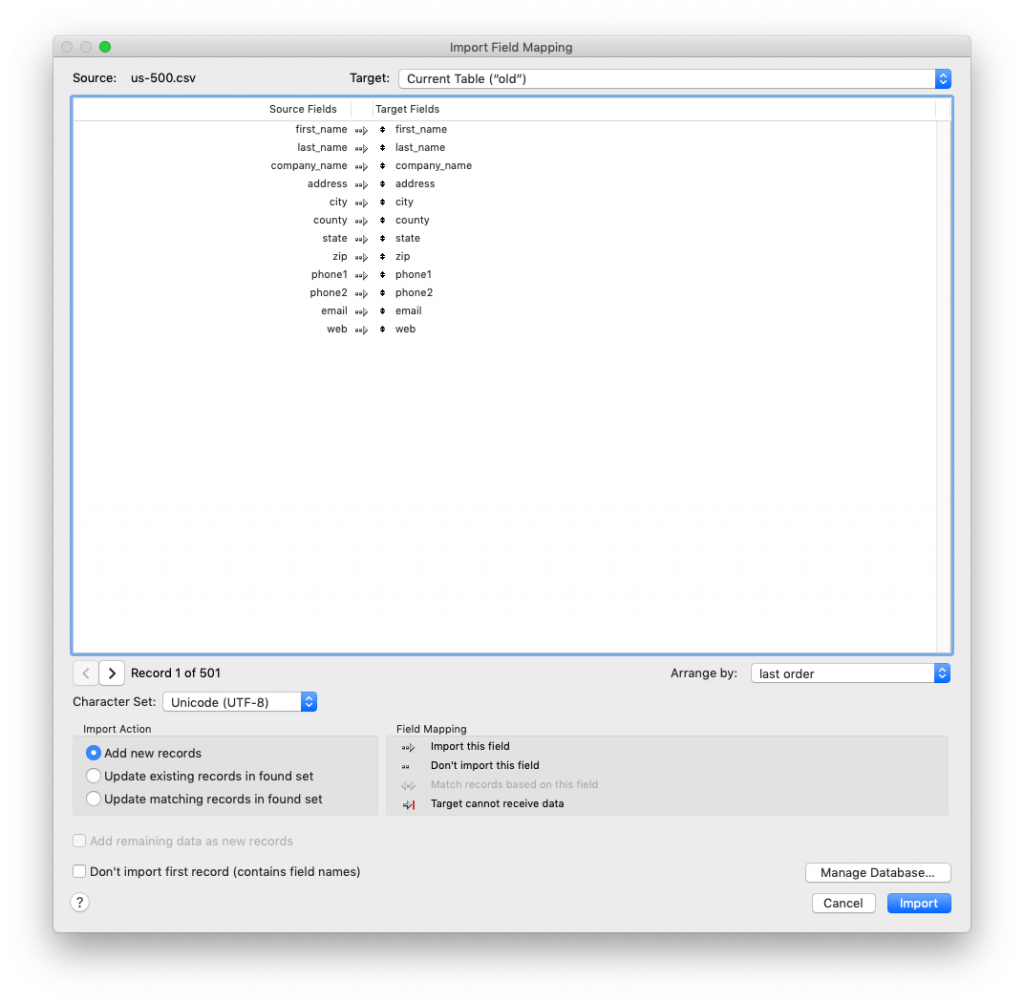 …In With the New

Luckily for all of us, FileMaker 18 ships with a brand new import interface: 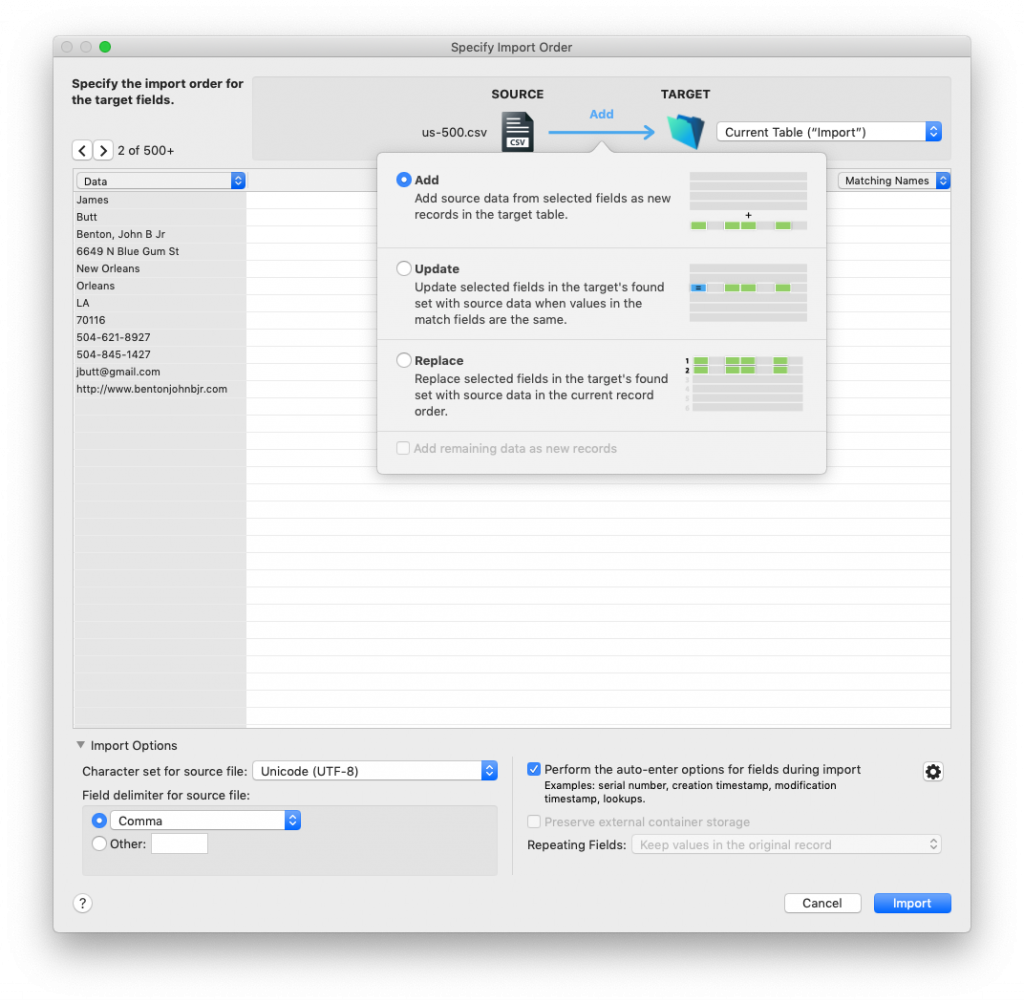 Just looking at it and you can already tell that a lot has changed, so let’s go over all of the great new features. 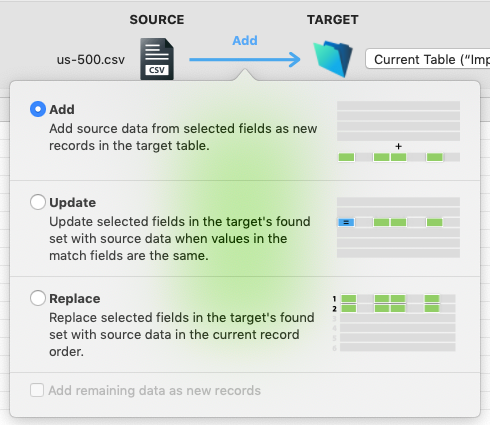 At the top of the interface you can click the arrow between the SOURCE and TARGET icons to choose the type of import you are looking to preform. FileMaker has gone out of its way to expand this with full text descriptions AND visual representations as well, which should definitely help users less familiar with what FileMaker can do with imported data. 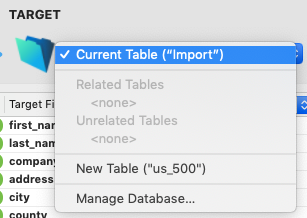 No big changes here, although the UI is arguably a little prettier and more intuitive by utilizing the FileMaker icon to help definitely designate your solution as the TARGET.

Previously, FileMaker only had a simple “First record contains field names” option to select. In the new interface, you can use any record/row of data in the source file as the field names. Any record/row before the one you select will be marked as “excluded” automatically and not imported. This is very helpful when importing Excel documents, as often there are additional header rows above the column names.

The first step to successfully mapping your SOURCE fields to your TARGET is to change the sorting/matching option, just as in the old interface. This is most useful if your TARGET field names match the column names in the SOURCE file, but can be helpful to organize the TARGET fields if you are manually assigning them.

Next up, you need to determine if a given SOURCE field is going to be imported or not. The ambiguous arrows of the previous interface have been replaced with plain text…”Import” or “Don’t Import”. They are also color coded for easy visual identification (green for import, grey for don’t).

When the Import Type is set to “Update”, you get the additional third option of “Match Field” in blue.

Now comes my favorite part. Gone is the need to drag your TARGET field up and down the list to the corresponding SOURCE field. Now you can either select your desired TARGET field from a list of all fields in the TARGET table, or search for it. Fields already mapped to another SOURCE field show up with an arrow inside a green indicator, while unused fields show up empty. 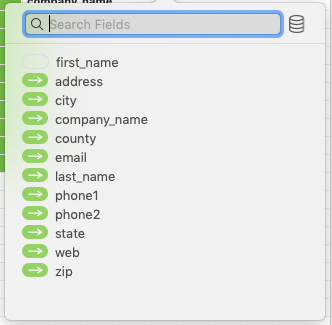 Towards the bottom-left of the interface, you can select both the character set…

…and the type of field delimiter used by the SOURCE file.

The new ability to select the type of field delimiter allows for Tab, Comma, Semicolon, and Space characters by default, but a custom character can also be defined.

What used to be somewhat of an afterthought during the import process is now front and center and quite customizable. Like before, you can determine whether auto-enter options defined in your TARGET table will be respected at all.

New to FileMaker 18 is the ability to individually select which fields that have auto-enter options defined will be calculated during the import.

If importing into a TARGET field that has auto-enter properties defined, you will also be presented with orange gear icon that will give you the option to have FileMaker respect those options or not next to the destination field name.

When importing from a FileMaker data source, you lose some irrelevant import options, such as the field delimiter options and character set selection. Instead, you get some options to control import behavior of FileMaker specific field types, such as containers and repeating fields.

Last, we have the confirmation dialog. Although not drastically different from the previous version, it is better organized and more verbose in letting you know exactly what happened during the import. 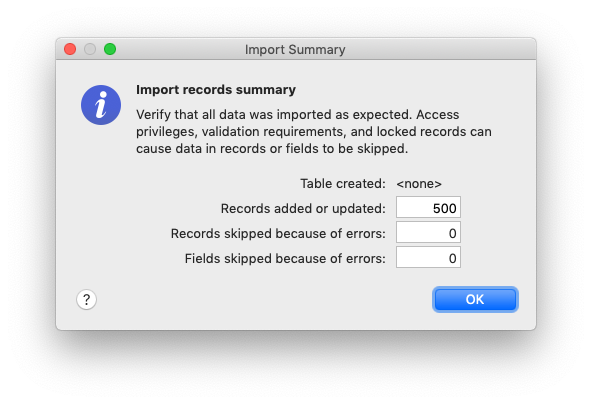 One additional new feature of importance is when converting a file from another format to a FileMaker solution. As in previous versions of FileMaker, you can “Open” a non-FileMaker file as means of converting it to a new FileMaker solution. Previously, the only option you were presented with was whether the first row contained field names or not.

In FileMaker 18, you are presented with a slightly stripped down version of the Import interface instead. This allows you to choose which fields to bring in and which record/row to use as the field names, just as when importing into an existing solution. One additional change is that under the TARGET table, you specify your desired table name (as no table exists yet).

The new import interface in FileMaker 18 is a welcome upgrade, whether you are new to the platform or have been using FileMaker for years. It streamlines the process, allowing you to setup an import quickly and reliably thanks to a very well thought out reimagining of the user interface. If you or any other user are importing data often, I’m sure this enhancement will save you time and aggravation, making FileMaker even faster and easier to use than ever before.