For awhile we’ve been asked: “Can you use Apple Maps inside FileMaker, rather than using Google Maps or MapQuest?” We decided to give it a shot, thanks to MapKit JS, the JavaScript implementation of the MapKit library widely used on macOS and iOS. Here is a technique our FileMaker and JavaScript development teams designed to enable Apple Maps inside a FileMaker solution. 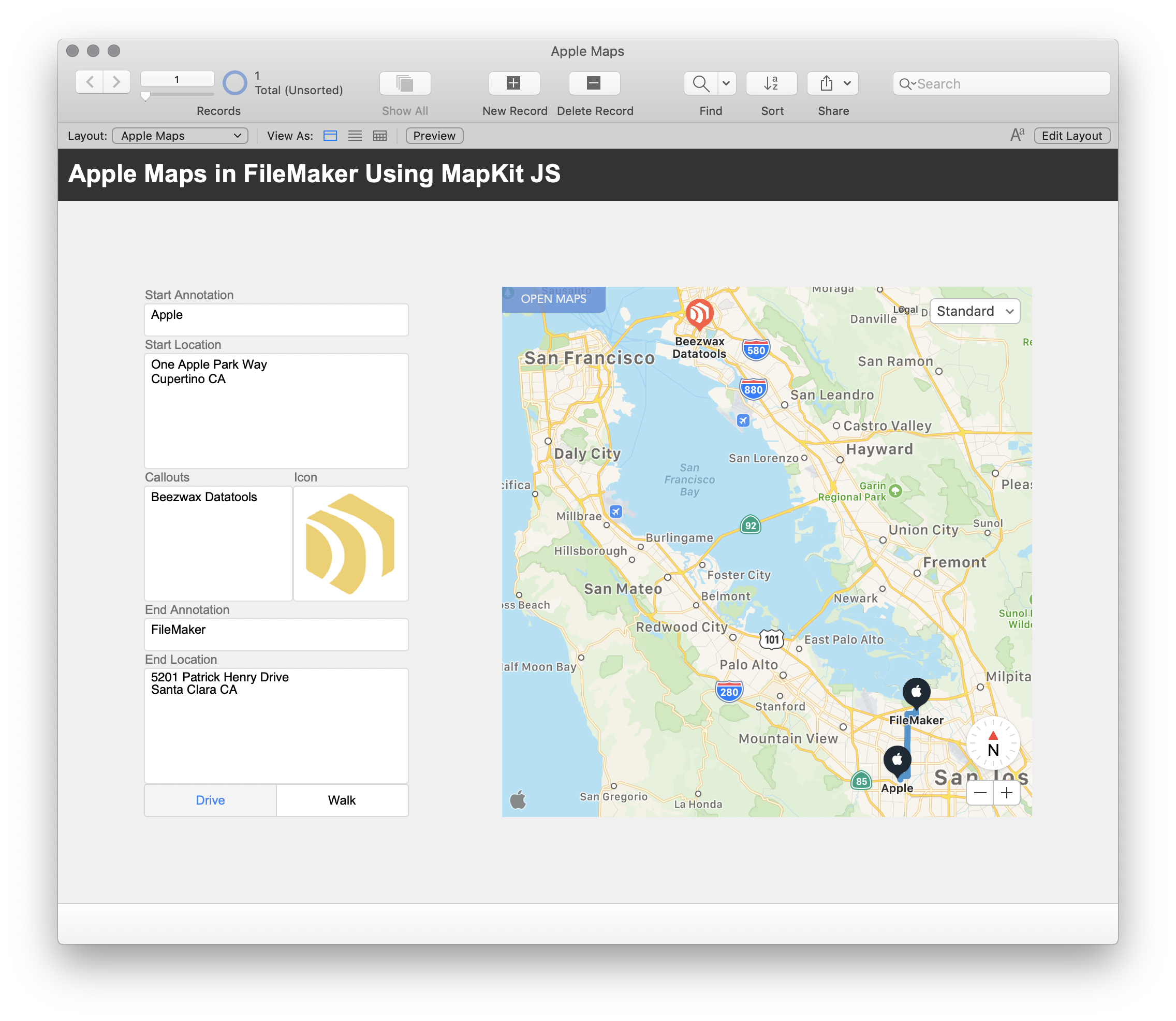 Many developers are familiar with using web viewers to display a map inside FileMaker, rather than in a separate web browser window or opening the Maps app. MapQuest is particularly easy to use with a web viewer, as FileMaker has built-in support and MapQuest includes a content identifier specifically for FileMaker implementations. Support for Google Maps is also built into FileMaker, though it takes a little more effort to hide the drawer on the left by embedding the map in an Inline Frame (iframe) tag. Apple Maps is more complicated, as at this time it does not support any sort of URL-based scheme.

We’ve been comfortable with using JavaScript for web viewer functionality inside FileMaker since the technique was first defined. And ever since Apple announced the beta availability of MapKit JS at this year’s Apple Worldwide Developers Conference (WWDC), we were excited to test it out with FileMaker. Just remember, Apple still considers MapKit JS to be “beta”, and it may be subject to modifications with implementation.

Here’s our approach to combining web viewers and MapKit JS in order to use Apple Maps inside FileMaker:

As noted above, you must have a JSON Web Token to query the MapKit JS API. There are many ways to do that, but we used Node.js 8.11.4.

Save the following code and update with your own team ID, key ID, and private key. Install Node and, in Terminal, enter node <filename.js> .

This should output a string representing the JWT. Copy this into the client-side JavaScript that initializes MapKit JS:

Now you can begin using the MapKit JS API.

This is the easy part. Create a few fields for address, search string, or whatever you need for your implementation; add a web viewer to a layout; and integrate the JavaScript.

The MapKit JS documentation provides details on the vast array of customization options available when using this library.

Here are two examples to get you started:

Since it is still in beta, the MapKit JS documentation is limited. There are few examples of how to use constructors, properties, and functions. You should become comfortable using console.log to output objects to your browser console.

We’ve built a simple demo file as a proof-of-concept. It is not meant to illustrate the full range of what is possible, but is, we think, a unique way of looking at map data: Given starting and ending points, highlight all locations along the way that fit our search. Our sample data is an all-important “good coffee finder”, but you could just as easily plot restaurants, gas stations, or “world’s largest object” tourist traps.

Note this demo is using a Beezwax token, which you’ll want to replace with your own. While beta MapKit JS is largely free, there is a daily API call allotment limit. If API calls exceed the daily allotment or the beta period has ended, this demo may no longer work without replacing the token with one of your own.

We ran into minor problems while experimenting with this technique.

Hiroshi Usui developed the JavaScript integration with FileMaker to enable MapKit JS and the Apple Maps example provided. Christopher Edwards architected, documented, and tested the FileMaker solution demo. Major credit goes to Brian Schick and Ryan Simms (among others) who pioneered JavaScript-in-FileMaker-Web-Viewer techniques, as well as to Mekuria Getinet for UX Design, and to fellow Beez who have helped test the examples provided here.