Recently I was tasked with implementing a picker list whereby the user could assign people to a project, and indicate each person’s hourly allocation to that project as that assignment was made. How can data be associated with names in a picker list, before those names have actually been stamped onto their own records?

And of the project record after the specified people were assigned: 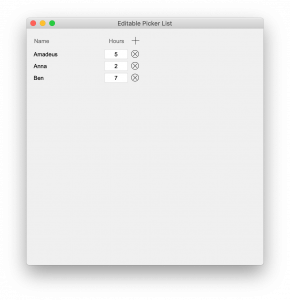 My first solution was to create a data field in the person table, to be displayed in the picker list, to serve as a temporary holding cell for the user to input their value into. The script would then clear this field when the user closed the picker list.

This didn’t satisfy the multi-user environment requirement, as two users trying to assign the same person would be trying to edit the same holding cell.

Additionally, there were performance issues as the user opened/committed records as they input values in the picker list.

My next thought was to create temporary records to hold the input value. A user would click into the field to add a value, and at that moment FileMaker would quickly create a record to hold the value. With some carefulness perhaps that could be the very same record that would eventually be committed if the user saved.

I didn’t actually work up this approach, as it seemed to have too much overhead to be creating records, and then still incur the cost of editing/committing those records as the user tabbed quickly through the list.

What I really wanted was a temporary holding bucket, which lead me to globals. Unfortunately, globals aren’t tied to a record. So I came up with a crazy interface with repetitions of a global field stacked on top of each other, using conditional visibility to hide all but the repetition corresponding to the row in the list (e.g., only repetition 5 would display on the 5th row in the list).

Aside from being a pain to work with in layout mode, the repeating globals also forced me to commit to a maximum number of supported items in the list, which wasn’t feasible for my client, who could have thousands of people in the picker list. Also, it didn’t play well with filtering/sorting the picker list, which shifted the names relative to their row number.

But the repeating global field got me thinking, what I really want is just a temporary bucket, with individual values tied to individual records. My ‘a ha’ moment was realizing that the user’s cursor is only in one field at a time, so I really only needed a single input field; the values for all the other rows could be stored in a single JSON object, and modified/retrieved as the user navigates from row to row.

Again, though this model doesn’t show it, I’ve implemented this in production with a version of the picker list that allows the user to quickly tab from row to row, and I’ve found it to be performant and to behave as expected. In that version, it’s also enhanced such that the picker list displays people already assigned to the project (for reference), but hides their entry field, thus disallowing them from being added multiple times.

Also, because the JSON object uses the PERSON::ID primary keys as its keys, the user is free to sort/filter the picker list without fear of values becoming disassociated from their records.

You can download the sample file here: Editable Picker List.fmp12